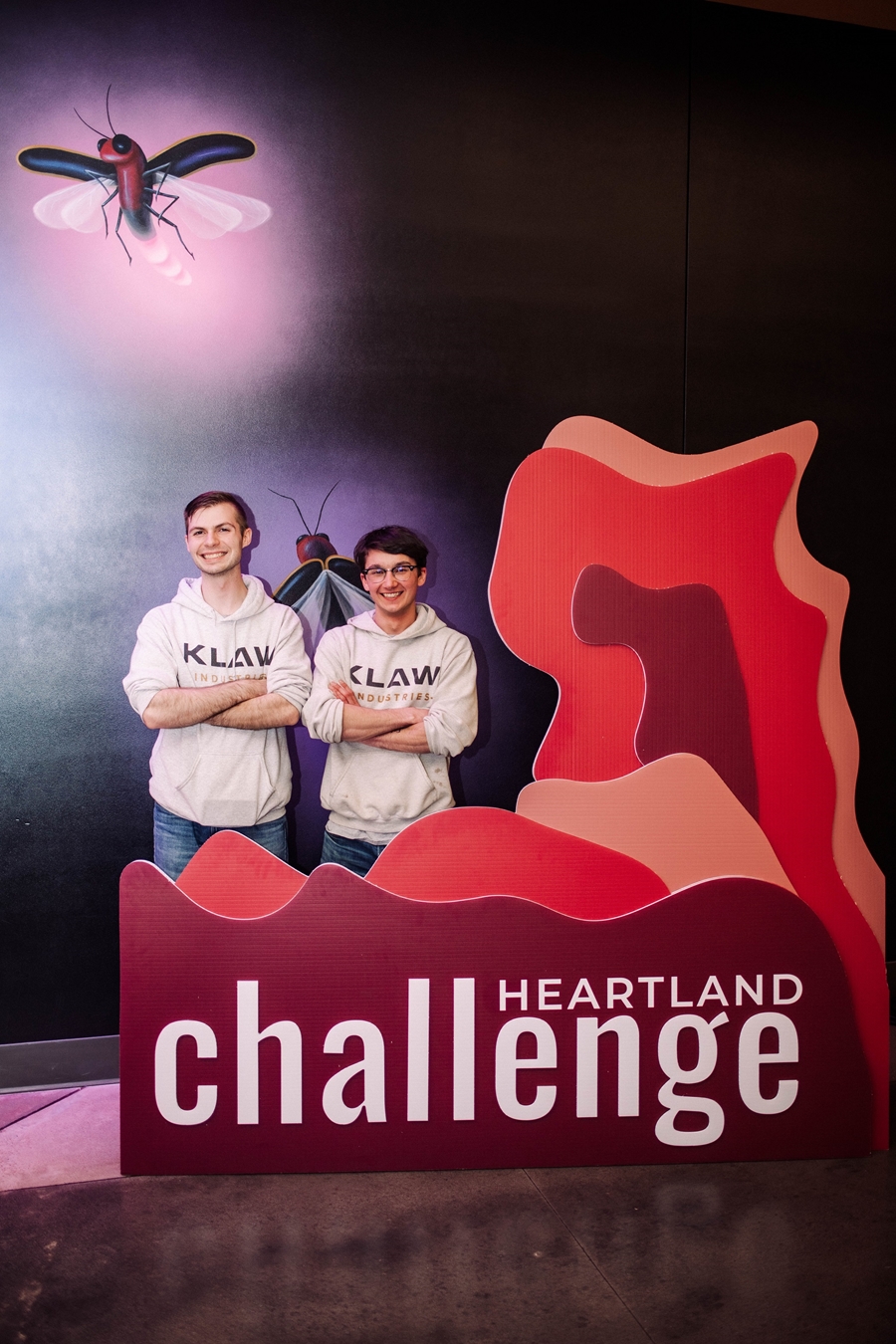 Nicholas Walling, left, and Jacob Kumpon of KLAW Industries have won the 2022 Heartland Challenge and over $100,000 in prize money. Their company transforms waste glass into cement as a partial replacement for concrete. Their product, Pantheon, increases the compressive strength of concrete while decreasing its embodied carbon.

BENTONVILLE, Ark. – KLAW Industries, a Binghamton University startup whose mission is to save the planet by reducing the carbon footprint of concrete, won the 2022 Heartland Challenge on April 16 and took home over $100,000 in prize money.

Dressed in steel-toed boots, jeans and hoodies – outfits worthy of a construction site – KLAW Industries’ Jacob Kumpon and Nicholas Walling hugged after their team was announced to be the big one winner of the competition.

“With our winnings, we will purchase a tractor-trailer to transport our product,” Walling said. “This will enable us to secure a contract with our second customer, which will involve delivering several tonnes of our product to them every month.”

The first-place prize of $50,000 had risen to $100,000 the day before, when keynote speaker Jim Goetz, partner of Sequoia Capital, surprised competitors by announcing he would tie the top prize.

KLAW Industries turns glass from landfills into a powdered cement substitute, dubbed Pantheon, which the company then sells to ready-mix concrete plants. So far, KLAW Industries has completed nearly 20 concrete projects and raised over $450,000. The company has purchased a pilot plant in New York and is working on a large scale to produce 25 tons of Pantheon per month.

“Compared to traditional Portland cement, Pantheon is a better performing and less expensive alternative,” Kumpon said. “It allows concrete mix managers to increase the compressive strength of their concrete while improving their bottom line.”

Cement production accounts for 8% of global carbon emissions, which is higher than the entire aerospace industry. Kumpon said. Pantheon replaces 30% of the cement in the concrete, decreasing its embodied carbon, Kumpon said.

“Our ultimate goal is to keep all glass from going in the trash,” Walling said. “The more we evolve, the closer we get to that goal while delivering cheaper, higher quality and more environmentally sustainable concrete.”

KLAW Industries beat out 12 teams from across North America who traveled to Bentonville for this year’s competition.

Deb Williams, who oversaw the organization and planning of the Heartland Challenge, said the 2022 field was particularly competitive.

“The finalist teams are incredibly impressive, and reaching the final of this competition speaks volumes about the quality of their businesses,” said Williams, who is also director of student programs at the Office of Entrepreneurship and innovation from the U of A.

“Based on my conversations with the judges, I know there was very intense deliberation in deciding the final four teams.”

EipSLS, a University of Michigan team that developed a new rapid test for allergy testing, finished second and won $25,000.

Beam Commerce of the University of Waterloo finished third and won $10,000. The company creates software to help increase sales for independent e-commerce stores.

CiphrX Biotechnologies, one of three U of A teams to reach the semifinals, finished fourth overall and took home $5,000. CiphrX, which works to advance brain cancer diagnosis, has developed a patent-pending test kit that enables same-day gene sequencing. CiphrX tied for second with KLAW Industries in the Elevator Pitch, earning a total of $7,000.

The Heartland Challenge took place in person for the first time in its three-year history, with the bulk of the competition taking place at the 21c Museum Hotel in Bentonville. The competition kicked off with a main event at the Crystal Bridges Museum of American Art and featured a Startup Expo at the Scott Family Amazeum to introduce the 12 teams to the public.

“There’s just no way to replicate what it feels like to have face-to-face conversations and make real human connections with people,” Williams said. “Whether you are a competing team, a judge or a participant, everyone came away with the same sense of energy, excitement and hope for the future of entrepreneurship in this region.”

New to this year’s competition was the Investor Roundtable. Sponsored by Cadron Capital, this optional event awarded three prizes of $3,000 and supplemented the main competition for teams wishing to simulate a casual conversation with investors.

Consulting firm staff detained for fraud; Man arrested for forgery to obtain bail for his clients