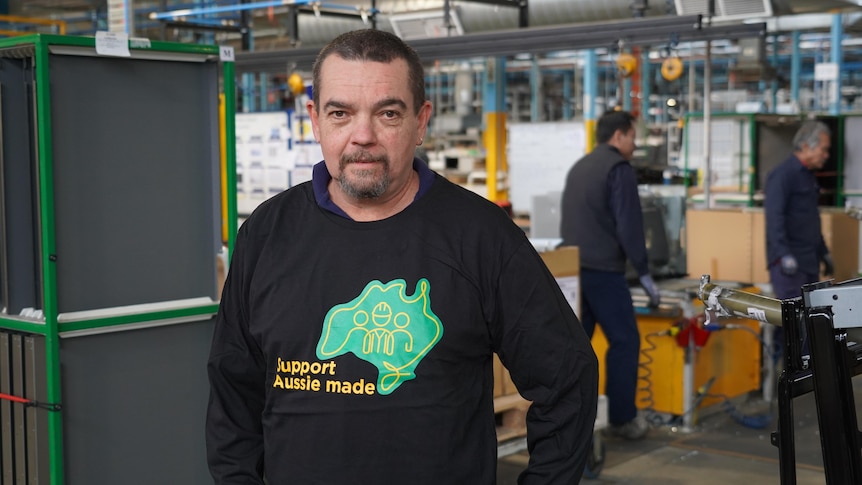 Instead of shutting down when the pandemic hit last year, a manufacturer in Adelaide decided to fill gaps in the international supply chain with its own locally made parts.

Matt Hastings’ employer, the Electrolux plant in Adelaide, was initially forced to shut down in March 2020 when the coronavirus hit.

The kitchen appliance manufacturing site closed for almost four weeks because it could no longer source the components it needed from overseas.

“What [the pandemic] told us our reliance on getting parts overseas was too great, â€said Hastings.

Mr. Hastings has been in manufacturing for 20 years and currently operates a “robotic cell” at the Electrolux plant in Dudley Park, making stove doors.

To reduce costly transportation costs, the company looked to source the parts locally, but then decided to manufacture them itself.

â€œIt was a lot of hard work, but we got the plant through some really tough times.

Adelaide’s packaging company, Detmold, has also changed its operations in response to the pandemic.

It began making millions of medical masks to fill orders from state and federal governments just weeks after cases were first recorded in Australia.

Mr Hastings said that while businesses have adapted, he hopes the pandemic will encourage long-term changes in consumer behavior.

â€œI know myself and other people now, when you go to buy things in stores you are always looking for the Australian symbol,â€ he said.

The call comes as the Australian Manufacturing Workers Union (AMWU) is launching a campaign today calling for more consumer and government support for locally made products.

“[Electrolux] is a classic and a good example of why we have to make things in Australia, â€AMWU Secretary of State Peter Bauer said.

â€œA lot of businesses have suffered during the pandemic and some have had to close their doors.

“But some are now trying to find other ways to make their parts or source their supplies. This has been a red flag.”

Mr Bauer said many manufacturers, including those that make household appliances like ovens, are struggling to balance growing demand for their products with severely constrained supply chains.

“We’re on the verge now, where we start to see things improve when it comes to manufacturing, but we have to try and find supply chains in Australia as businesses recover,” he said. -he declares.

â€œPeople start spending and they don’t go overseas – they buy things in Australia.

“We are sending a message to our state and federal governments to support the purchase of products made in Australia.

“We need the government to start investing in products made in Australia.”

Mr Bauer said he wanted to see more Australian content included in all major projects and for sourcing processes to be tightened so that Australian manufacturers and suppliers are used at every possible opportunity.

Innovation and Skills Minister David Pisoni said the South African government was “ahead” of the union’s calls and underscored its support for Detmold and other initiatives.

â€œWe are actively supporting companies in South Australia in purchasing their products,â€ he said.

â€œOne of the things that came out of COVID was that we realized that there are important things that we need to manufacture here in South Australia and Australia, and there has been a shift towards doing so. “

He said the government is committed to investing in “projects that will transform our manufacturing sector, create jobs and increase scale, growth and competitiveness.”

â€œAustralia’s manufacturing sector continues to grow stronger, with trading conditions at record levels and strong confidence in the future of the sector,â€ he said.

â€œBy supporting local manufacturers and encouraging the growth of new manufactures, we are strengthening the ability of local industry and manufacturers to compete for large procurement projects, both in the public and private sectors.