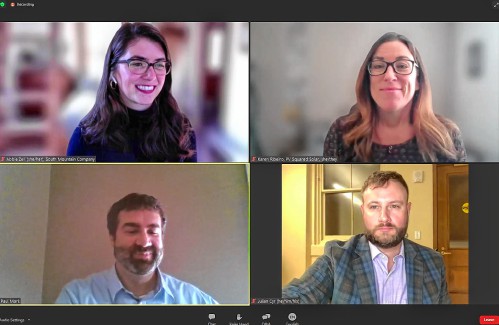 State Representative Paul Mark this week teamed up with State Senator Julian Cyr and the American Worker Co-operative Federation to host an event to tout the benefits of worker-owned co-ops like PV squared in Greenfield.

In partnership with the Coalition for Worker Ownership and Power, the hosts welcomed comments from Karen Ribeiro, worker owner of PV Squared, and others affiliated with worker co-ops and their cause. Ribeiro said she has been an employee-owner for two years and she hopes all entrepreneurs will find their way to employee ownership.

“Our economy would definitely be more robust and resilient,” she said.

Ribeiro, who works in design and sales, explained that his background in the corporate world – primarily in banking – stood “in such stark contrast to the transparent and collaborative, roll-up-your-sleeves- whole co-op” which she now enjoys. She said the solar business is in its 20th year and has about 50 employees, about two-thirds of whom are worker-owners.

“We serve west-central Massachusetts and, for co-op-focused businesses like Equal Exchange, other parts of the state or neighboring states,” she said. “We were founded as a worker cooperative and have been supported by, and have supported, many other companies in establishing governance models, drafting bylaws, sharing cooperation, collaborating on market and marketing approaches, and having heart-to-heart conversations about what we’ve learned from the school of hard knocks.

Abbie Zell, communications coordinator and worker-owner of South Mountain Co., a renewable energy company on Martha’s Vineyard, also spoke at the one-hour virtual event on Monday. About two-thirds of workers share ownership and the rest are on that path. She mentioned that worker-owned co-ops have on average 33% higher wages and better benefits than businesses operating under other models.

Regarding the economic fallout caused by the global COVID-19 pandemic, Zell said studies show co-ops “have weathered this storm better than others.” She also said co-ops have lower employee turnover.

Zell also mentioned that 57% of state worker-owners identify as people of color.

Alex Papali, policy director of the Center for Economic Democracy in Boston, said a key tenet of the cooperative movement is the idea of ​​being stronger together. He said he was helping to staff the Coalition for Worker Ownership and Power.

“We are so proud of the work COWOP has done over the past two years in building a strong statewide organizing infrastructure to ensure workers own their businesses – and control their place. work – a viable option for entrepreneurs in Massachusetts and beyond,” he said.

Papali also spoke about bills at the State House to improve and fortify the worker ownership ecosystem.

The first is H.2059, sponsored by Reps Paul Mark, D-Peru, and Erika Uyterhoeven, D-Somerville, which would make revenue-neutral language changes to enable workforce training programs that already exist for underemployed and unemployed workers, or those in employment transition, to include training in business development, operations and management.

Another bill is S.1223, sponsored by Sens. Jason Lewis, D-Winchester, and Jamie Eldridge, D-Acton, which aims to give workers a say in the decisions of their companies by requiring Massachusetts corporations with annual revenues over $100 million to ensure that at least 40% of the seats on the board of directors are elected by the employees, with the same duties and responsibilities as the directors elected by the shareholders.

Papali said the Center for Economic Democracy is also supporting $500,000 budget amendments to improve technical assistance to worker co-ops under the Massachusetts Growth Capital Corporation’s Small Business Technical Assistance Program, as well as for $4 million to be administered by the Cooperative Fund of New England to provide grants and loan guarantees to worker-owned businesses to provide some stability in the current economy.

Mark told a personal story about his father who was fired from his job in a warehouse two days before Christmas, and his family, due to the universal lack of cell phones at the time, found out about it to evening news before his father could come home to tell anyone. He said worker-owned co-ops “don’t do things like that. They hire the workers who are there.

Cyr said he has always loved co-ops because of the significant advantages and benefits associated with them. He said his interest stemmed from working in the restaurant his family had owned in Truro for 28 years.