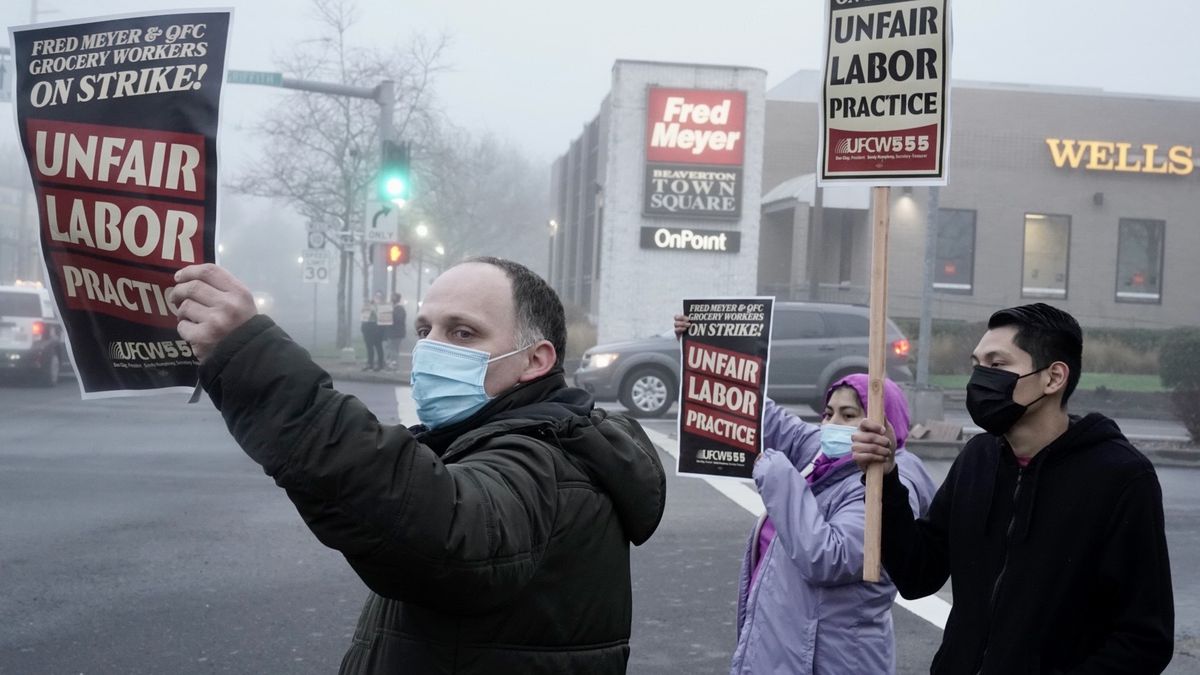 Thousands of employees at Fred Meyer, QFC in Oregon go on strike

A weeklong strike hits a number of Oregon grocery stores just a week before Christmas Day.

United Food and Commercial Workers Local 555, representing many employees of the Fred Meyer and QFC stores, confirmed Friday morning that it was moving forward with a walkout at stores in Portland, Bend, Newberg and Klamath Falls. The details and specifics of a clutch are complicated. While the UFCW represents around 10,000 Fred Meyer employees, not all stores, departments or categories of workers are participating in the strike.

The union has been in collective bargaining for months with the supermarket chains owned by Kroger. Last weekend, the UFCW announced that its members had authorized a strike.

Adam Thompson, who works at the Fred Meyer store in Beaverton Town Square, joined the picket workers outside the store on Friday morning.

â€œA lot of people honk and wave,â€ he said. â€œThere are a lot of people who support us. It makes me feel like it’s worth our time.

The picket line outside the Beaverton supermarket began around 6 am Friday, with more than a dozen protesters in attendance at 7:30 am Over the next hour, the crowd grew.

The union and company bargaining teams met this week in contract talks, so far without any agreement.

Union representatives said Fred Meyer underpaid some workers, in violation of the terms of the contract. A spokesperson for the UFCW also said the grocery chain had failed to provide the union with the necessary information to refute or verify its concern, or to address it through the grievance process.

The UFCW said the insufficient pay and lack of documentation constituted unfair labor practices – and it was on the basis of these allegations of unfair labor that the UFCW prepared to strike this week. In addition, union spokesman Miles Eshaia said on Friday, the union is calling for substantial wage increases.

A spokesperson for Fred Meyer said the company was monitoring and planning to continue to comply with applicable labor laws.

On Thursday, a sign at a Fred Meyer store in North Portland read “Temporary Associates Ongoing Engagement” and specifically asked for applicants willing to cross the picket lines.

On Friday morning, a statement from Fred Meyer provided to OPB confirmed that its stores affected by the strike, as well as the affected QFC stores, remained open to customers. In the statement, Fred Meyer and QFC called UFCW Local 555’s decision to strike “reckless.” The companies are urging the union to “consider all the implications for its members as the holiday season approaches.”

â€œAt a time when we want to invest more than ever in salary increases and affordable health care, the UFCW has chosen the disruption and the unknown for our associates and their families,â€ said Dennis Gibson, president of Fred Meyer, in the press release. â€œWe value our associates and thank them for what they do every day for each other and for our customers. We are committed to serving our customers and our stores are open and stocked with fresh food and essential household items. “

According to Fred Meyer, she and QFC have proposed a total investment of tens of millions of dollars for more than 5,000 associates covered by the union contract, including $ 36 million for additional salaries, $ 30 million for annual dues for health care benefits and $ 5 million for pensions.

“While we respect the rights of our associates to participate in this work stoppage, any associate who chooses to continue working is welcome,” Gibson said in a Friday statement. â€œWe remain open to continuing to meet with UFCW. Our associates would be better served if the UFCW worked with us to come to an agreement that does not leave our associates without a paycheck during the holidays.

Outside a Fred Meyer in southeast Portland on Friday afternoon, a group of picket workers were greeted with encouraging horns from cars – and a fire engine – driving down Hawthorne Boulevard.

â€œEveryone needs better wages. It is not good what they are doing. I didn’t know how much work it takes to be a cashier until I started working here and how difficult it is, â€said employee Nicole Rushing, who stood outside the store. â€œPeople forget about us. They treat us like garbage.

Two leaders of the Oregon Education Association, which represents teachers in Oregon, joined the crowd to show their support.

â€œWe are here because we support collective bargaining rights,â€ said Reed Scott-Schwalbach. â€œWe support the ability of workers to come out and say, ‘We deserve something better. “

Two years ago, UFCW workers also authorized a strike, but this time they came to an agreement without backing down. In that October 2019 dispute, the disagreement with the grocery companies included Fred Meyer and QFC, but also Albertson’s and Safeway.

Lined up with the strike, mass picketing will begin at Fred Meyer stores in the Portland area on Friday afternoon, with daily protests scheduled through Thursday.

This week, with contract negotiations underway in Oregon, Kroger announced measures to encourage employees to get vaccinated against COVID-19. The company said it no longer allows unvaccinated workers at Fred Meyer and QFC stores to get up to two weeks of paid emergency leave if they fall ill with COVID-19. They will have to use regular paid time off or take unpaid time off.

Vaccinated workers who get a breakthrough case will still benefit from the special leave, and employees are still entitled to $ 100 to be fully vaccinated.

Kate Davidson of the OPB contributed to this story.