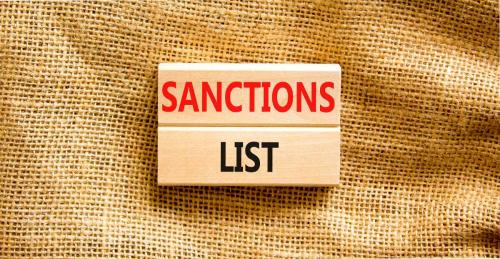 On May 4, 2022, the UK government announced1 a ban on UK individuals or entities exporting certain professional services to Russia, prohibiting Russian businesses from benefiting from those services. Amendments to the UK sanctions regime have not yet been implemented and the timing of their introduction is not yet known. It remains to be seen whether and how this ban could impact intra-company services (such as accounting and management consultancy) provided by a UK parent company to its Russian subsidiary, or will it instead be limited to unaffiliated independent service providers. In light of the tone of the announcement, however, the ban should restrict the provision of these services, directly or indirectly, to people connected to Russia or in Russia.2

Prohibited services include the provision of accounting, management consulting and public relations (PR) services, which are said to account for around 10% of Russian imports in these sectors. The new measures target Russia’s dependence on Western service companies for the production and export of manufactured goods in a bid to “enhance” economic pressure on Putin’s siege economy. During the announcement, UK Foreign Secretary Liz Truss said that “cutting Russia’s access to British services will put more pressure on the Kremlin and ultimately help ensure Putin’s failure in Ukraine.”

The UK government has also announced designations (asset freezes and travel bans) of 31 individuals and 32 entities, following the publication of a UK-funded research report on 1 May 2022 , exposing how the Kremlin uses a “troll factoryto spread lies on social media and in the comment sections of popular websites.3,4 This latest round of sanctions largely targets Russian individuals and entities in mainstream media believed to be responsible for spreading destabilizing false information about Ukraine, including to justify President Putin’s aggression against Ukraine.

Those named include news correspondents linked to Russian state television channel Channel One, as well as a number of war correspondents believed to be embedded with Russian forces in Ukraine. Designated entities include All-Russian State Television and Broadcasting, a major state-owned broadcaster; InfoRos, a press agency; and the Strategic Culture Foundation. The list of Russian and Belarusian individuals and entities sanctioned by the UK government now exceeds 1,600.

These developments are consistent with a recent amendment to the UK sanctions regime, in force since April 29, 2022,5 targeting internet services, social media accounts and app store companies responsible for RT (formerly Russia Today) and Sputnik content.

On May 5, 2022, the UK government announced that it had added Evraz plc,6 the UK holding company of the multinational steel and mining group, to the consolidated list of UK asset freeze targets, barring any UK person or entity from doing business with Evraz.

The Foreign Office said that Evraz “operates in sectors of strategic importance to the Russian government,“noting that Evrav produces”28% of all Russian railway wheels and 97% of railway tracks in Russia. This is vitally important as Russia uses rail to transport key military supplies and troops to the front line in Ukraine..” Roman Abramovich, a appointee since March 10, 2022, retains a 29% stake in Evraz and, at the time of his appointment, the UK government alleged that Evraz was “potentially supplying steel to the Russian military that could have been used in tank production.Evraz denied this allegation and said he did not expect him to be disciplined as Abramovich did not have “effective control” of the company. It should be noted that the allegation did not not been repeated in the announcement of May 5, 2022 or in the designation.

The move follows the suspension of Evraz’s shares on March 10 and signals the British government’s efforts and intention to use sanctions to further deter companies operating in strategic sectors in Russia.

A general license, issued by the Financial Sanctions Implementation Office on April 29,7 has been granted allowing UK persons to pursue certain business activities involving the North American subsidiaries, in particular the following subsidiaries of Evraz:

In summary, the General License permits a UK person or entity to carry on business activities, including but not limited to payments to or from Evraz affiliates under any obligation or contract, including payments to or from any third party; and receipt of payments from Evraz affiliates for audit services. The blanket license does not authorize any act that the person knows, or has reasonable grounds to know, will result in the provision of funds or economic resources for a designated person.

The latest round of sanctions further prevents UK companies and service providers from doing business in Russia and increases the compliance obligations of these companies and service providers to ensure they do not fall foul of this news. measures. However, the UK’s current measures do not come close to a comprehensive sanctions regime, and there remains significant scope for further escalation of sanctions against Russia.

The government’s ban on exporting these services is not expected to take effect for several weeks and, notably, does not prohibit the provision of legal services (or other types of services not listed) to Russian clients, subject to the prohibition on dealing with designated Russian persons or entities without a license and other related restrictions. The announcement practically formalizes the exodus of professional services companies from Russia, such as the “Big Four” accountancy firms, all of which had, on March 7, announced that they would end their commercial activities in Russia.

Under the various sanctions measures, UK persons are prohibited from any dealings, direct or indirect, with anyone on the sanctions list, or anyone owned or controlled by a designated person or entity. The assets of sanctioned persons are frozen. In addition, the Russian government recently announced that until the end of 2022, Russian banks and financial institutions are allowed under Russian law to refrain from publishing certain information in order to avoid self-imposed sanctions. -so-called “hostile states”, especially with regard to property. and control structure, officers and directors, and corporate restructuring.8

The international response to the Russian-Ukrainian conflict has resulted in a rapidly changing sanctions landscape, and companies and organizations should continue to closely monitor communications/guidance from authorities in the UK, as well as the US, European Union and other relevant jurisdictions. – particularly given the UK’s urgent designation procedure.9 Given the overlapping but distinct sanctions regimes, companies and organizations doing business in the region should consider the sanctions measures of all applicable jurisdictions.

1 Russia cut off from British services.

8 Please note that this summary does not constitute legal advice under Russian law.

9 In March 2022, the UK adopted an “urgent designation procedure” to allow the UK to nominate individuals and entities, if they have been nominated by the United States, European Union, Australia , Canada and others, under a similar sanctions regime and the relevant UK Minister believes it is in the public interest to use this procedure. Such a designation remains in effect for a maximum of 112 days, after which it will cease to have effect, unless the Minister certifies that there are reasonable grounds to suspect that the person meets the criteria for designation under the scheme. British sanctions.

NLRB finds merit in union charges against Amazon and Starbucks